We believe all children have unlimited potential.

The Imagination Project is an educational 501(c)3 non-profit dedicated to reaching the most underserved children
during critical stages of development from the ages of 3-12 through literacy programs, outreach and digital content.

Our mission is to travel to underserved schools and communities to inspire
the imagination and empower children to believe in endless possibilities for themselves.

With your help we can make that dream a reality. 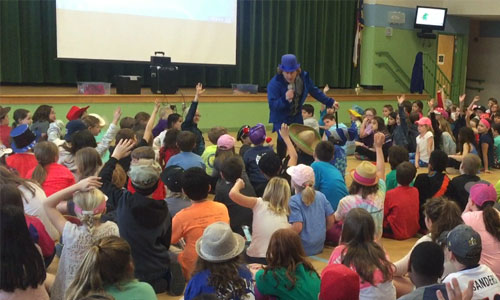 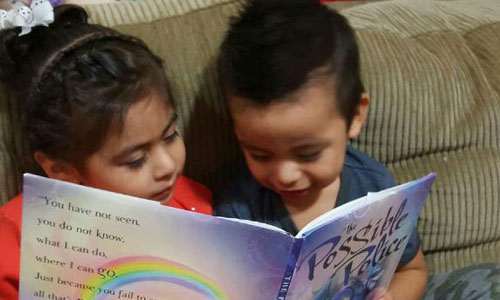 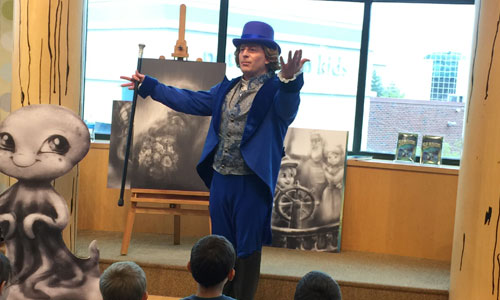 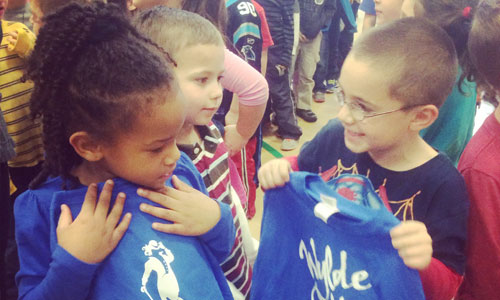 All children need a core belief system that empowers them. For the most economically disadvantaged child, these core beliefs are more than essential, they are critical. Very often the reality of their surroundings move them in the opposite direction of possibilities. Suffered long enough, children who lack positive messaging eventually develop a permanent core belief system that is devoid of vision and full of limits.

Our goal is to remove these limits and empower these children to reach any heights imaginable.

The idea for The Imagination Project came from the live interactions between its founders and thousands of children.

As producers and authors, Michael Jefferson and Bradley Scheel have been imagining and storytelling together for over twenty years. Since 2010, the partners have dedicated their time and passion to children’s literature and entertainment.

Starting with the launch of their first book The Possible Police in 2014, Michael and Brad have spent endless hours traveling parts of the country doing live shows in schools, libraries and bookstores, even creating a full length ballet all based on their character.

It was during these travels that they noticed a gap in their success. Children not frequenting Barnes and Nobles on weekends and schools without robust PTA funds were the hardest to reach. The message was driven home while at a small low income school in the heart of Brooklyn when a teacher sadly revealed, “no one ever comes here.”

It was this moment that inspired our mission.

“This was one of the most engaging and entertaining Author Talks this season at the Brooklyn Public Library. It was great for the kids to have the opportunity to see Wylde Scott, the character they read about, brought to life. You have a wonderful way of connecting with children of all levels and ages and eliciting feedback and crowd participation.”

“The moment you doubt whether you can fly,
you cease for ever to be able to do it.”

Help Us Empower a Child

The Imagination Project is designed to empower children through three specific and connected strategies all designed to permanently connect underprivileged children to an empowered belief system: literacy, outreach, and digital content.

If you have witnessed the power of a child meeting a costumed character, you know the encounter can be magical for the child. Since launching in September of 2014 Wylde Scott has done over 50 live shows in book stores, libraries and elementary schools, with audiences numbering from twenty to five hundred.

The connection from these live events is incomparable to any other form of communicating with the young reader and has far exceeded our expectations. There are nearly 50,000 Title 1 schools in the US, with nearly 20 million children.

We would love to visit each and every one.

At the center of The Imagination Project is a unique literacy campaign. Through their character Wylde Scott., the founders will be publishing 2-3 books each year all aimed inspiring the imaginations of children from 3-12. As part of the project our goal is to give away at least 10,000 books each year for free.

To greatly enhance the literacy campaign, The Imagination Project will be focused on bringing its message in person to as many underserved schools across the country as possible. With each live visit Wylde Scott will personally give each child a book to take home with them.

As an effort to increase exposure and reinforce the impact of our literacy and outreach campaign, The Imagination Project will be developing digital content designed for public broadcast, mobile platforms and downloadable formats to be used for free in classrooms across the country.

“Imagination is more important than knowledge. For knowledge is limited, whereas imagination embraces the entire world, stimulating progress, giving birth to evolution.”

The Power of Imagination

THE FINAL RESULT: THE EMPOWERED CHILD

When a child can successfully combine a belief system that anything is possible with the belief that they themselves are capable of anything, that child is truly empowered. This is where dreams take flight, where the spark of the imagination and the fuel of belief ignite.

Our highest goal at The Imagination Project is to create empowered children by instilling in them a permanent core belief system that prepares them to take on the multitude of challenges life will present, convinced they are capable of enormous success. We believe this begins with the imagination, grows with the belief that a world of endless possibilities exists and becomes a permanent functioning toolset when a child truly believes that following their dreams is as natural as tying their shoelaces in the morning.

How do you teach all of this to a five year old, you might ask? You start with fun.

Reaching the belief system in the third level on this graph is a powerful accomplishment for any child. But we believe that one final step is needed. In order for a child to reach their full potential they must believe deep in their heart that they are capable of accomplishing these dreams. This can be tough for any child. This is particularly tough for those on the bottom of the socio-economic scale. While many of their more affluent counter-parts may be raised in a world where parents are professionals and higher education is an after-thought for most members of their family, children from economically disadvantaged environments can come from a world that is quite different. While they may be able to see the possibilities of life and have big dreams, deep down their core belief system tells them that those possibilities really exist for someone else. The final and most critical step in this process is to connect the world of possibilities to the child’s vision of themselves. In addition to dreaming and believing, The Imagination Project will be working on developing one more core value, convincing our audience that they themselves are powerful and capable of reaching the heights they are dreaming about.
Close

LEVEL 3: A WORLD WHERE ANYTHING IS POSSIBLE

This level represents the first desired outcome of combining the first two core values. Anything is truly possible when a child is able to combine an immense universe of imagination with the belief that dreams are possible. A child who has successfully built this belief system is no longer confined by the boundaries of the reality facing them, no matter how difficult the circumstance.
Close

The second core value that The Imagination Project will be focused on is belief. This is more challenging than one might think. While the human spirit wants to believe that anything is possible, the world around us can be a constant portent of negative messaging. From the time they begin to express their very first dream, children are faced with an incredible wall of doubters and naysayers waiting to tell them what is not possible, and what they cannot do.

Our goal is to teach children to build an unassailable fortress of their own, where they refuse to surrender their dreams to anyone. If imagination is the spark then believing in the power of the imagination is the fuel that allows it to travel anywhere.

All great advances in mankind come from the imagination. Not just math, or science, or engineering, but from a spark that takes a single thought into the vast universe and drags an entire generation into a new and exciting direction. Too often our youngest minds are bombarded with curriculums and standards and measurements when not nearly enough attention is paid to creating giant, vivid imaginations.

The first core value we hope to instill is to build powerful imaginations. A child who is capable of dreaming is capable of seeing possibilities that do not exist and have not been done. The foundation for any child to reach their potential is to imagine that nothing is impossible.

All children are born with wonderful imaginations. Like any muscle in the body, imaginations grow strong when they are stimulated and exercised repeatedly, and grow weak when they go unused. Through The Imagination Project children will not only learn the importance of their imaginations, but to use them, often and relentlessly, to solve any problem, and to have ridiculous amounts of fun in the process. When a child masters the art of imagination, their world expands, opening up their potential in ways no other toolset can. This is the first step in actually seeing a world of endless possibilities.

Click on a section of the pyramid to learn more!

“I believe children should live in the land of dreams and inhabit the world of endless possibilities. There will always be a long line of doubters and naysayers waiting to tell them what they cannot do. I want them to know something different.”

The World of Wylde Scott

Wylde Scott is a traveler, storyteller and champion of children’s imagination whose goal is to entertain and inspire children to follow their dreams.

He was born of the imaginations of Bradley Scheel and Michael Jefferson, founders of The Imagination Project, and has been brought to life to connect with children in ways no ordinary adult is able to. 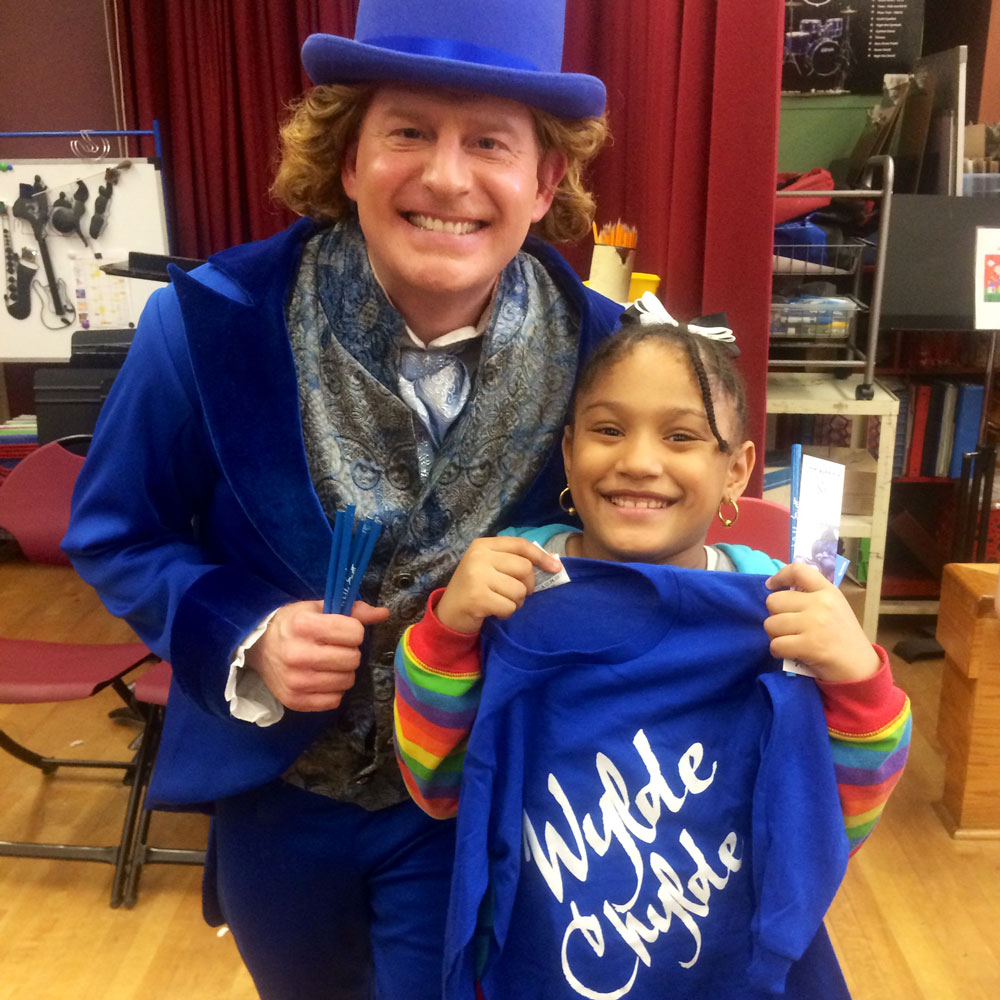